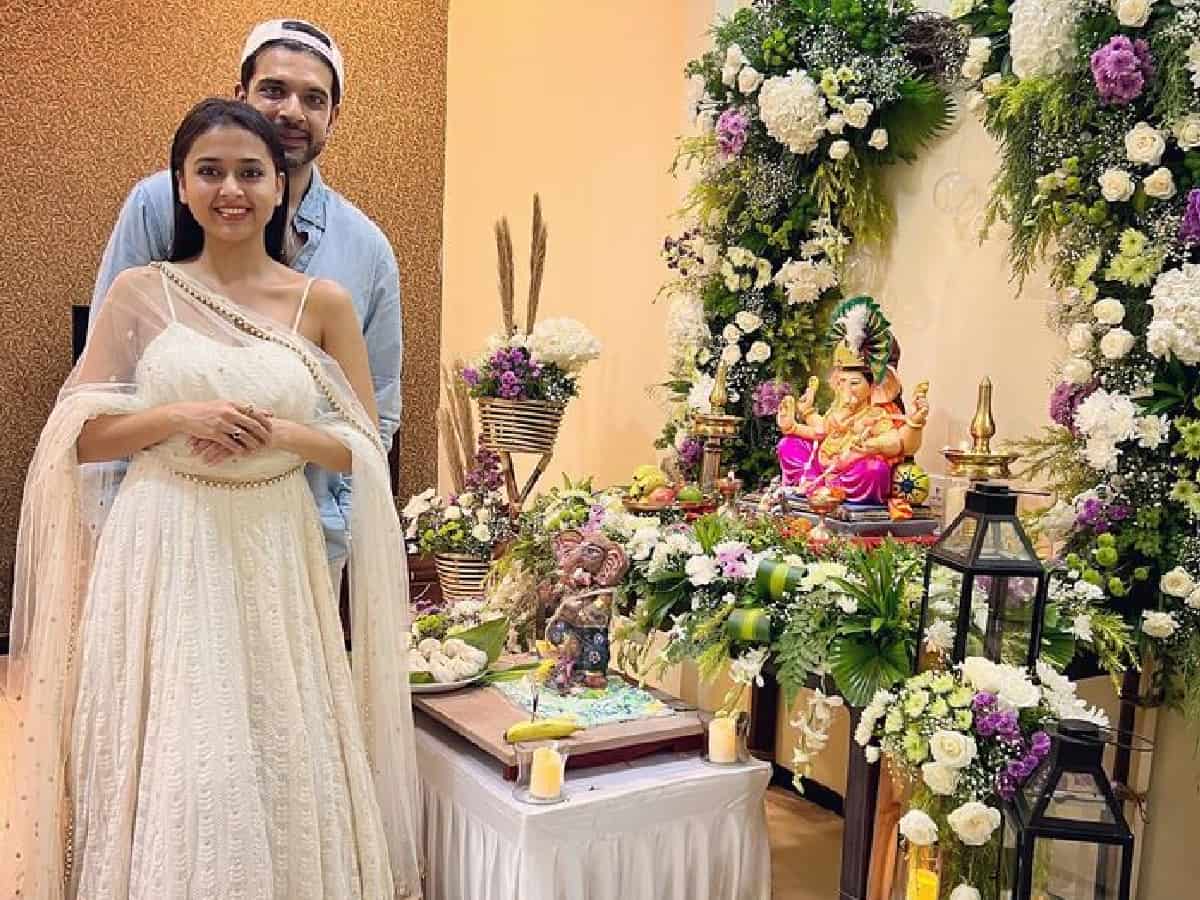 Sharing the pictures, he wrote, “I just like how we’re all round. Ganpati Bappa Morya..!!! Thank you @rithvik_d for teaching me how to sculpt.”

The couple could be seen standing in front of Ganesh’s idol and struck a pose for the camera.

In the first picture, two Ganesh idols could be spotted. One of them is made by Karan as his caption indicated. He thanked actor-host Rithvik Dhanjani for teaching him how to sculpt.

All smiles as the cute couple were seen celebrating the festival together by taking out time from their busy schedule.

Tejasswi was seen dressed in a white and golden embroidered lehenga while her beau Karan opted for an uber cool yet stylish look. He was seen wearing a denim shirt and a cap in reverse.

Fans can’t stop gushing over the cute couple and are currently showering love on them.
They garnered the post with heart emojis.

Ganesh Chaturthi, a ten-day festival that starts on the fourth day of the Hindu lunisolar calendar month Bhadrapada, started on August 31 this year. The festive period is also known as Vinayak Chaturthi or Vinayak Chavithi.

It is celebrated with much fanfare in Mumbai and other parts of Maharashtra with lakhs of devotees converging onto pandals to seek blessing from Lord Ganesh.

With 2022 bringing back Ganesh Chaturthi festivities following two-year-long COVID-induced hiatus, preparations are in full swing across the nation.

For the festivities, people bring Lord Ganesh idols to their homes, observe fasts, prepare mouth-watering delicacies, and visit pandals during this festival.

This auspicious ten-day festival starts with Chaturthi Tithi and ends on Anantha Chaturdashi.

Karan and Tejasswi fell in love with each other on ‘Bigg 15’. Karan became the second runner-up, and actor Tejasswi Prakash won the season. Popularly called ‘TejRan’, Karan and Tejasswi make regular public appearances together, sending out couple goals.

The couple frequently share their cute photos and videos on social media which gather all the eyeballs.

On the work front, Tejasswi can be currently seen in Ekta Kapoor’s much popular show ‘Naagin 6’ alongside Bigg Boss 15 contestant Simba Nagpal.