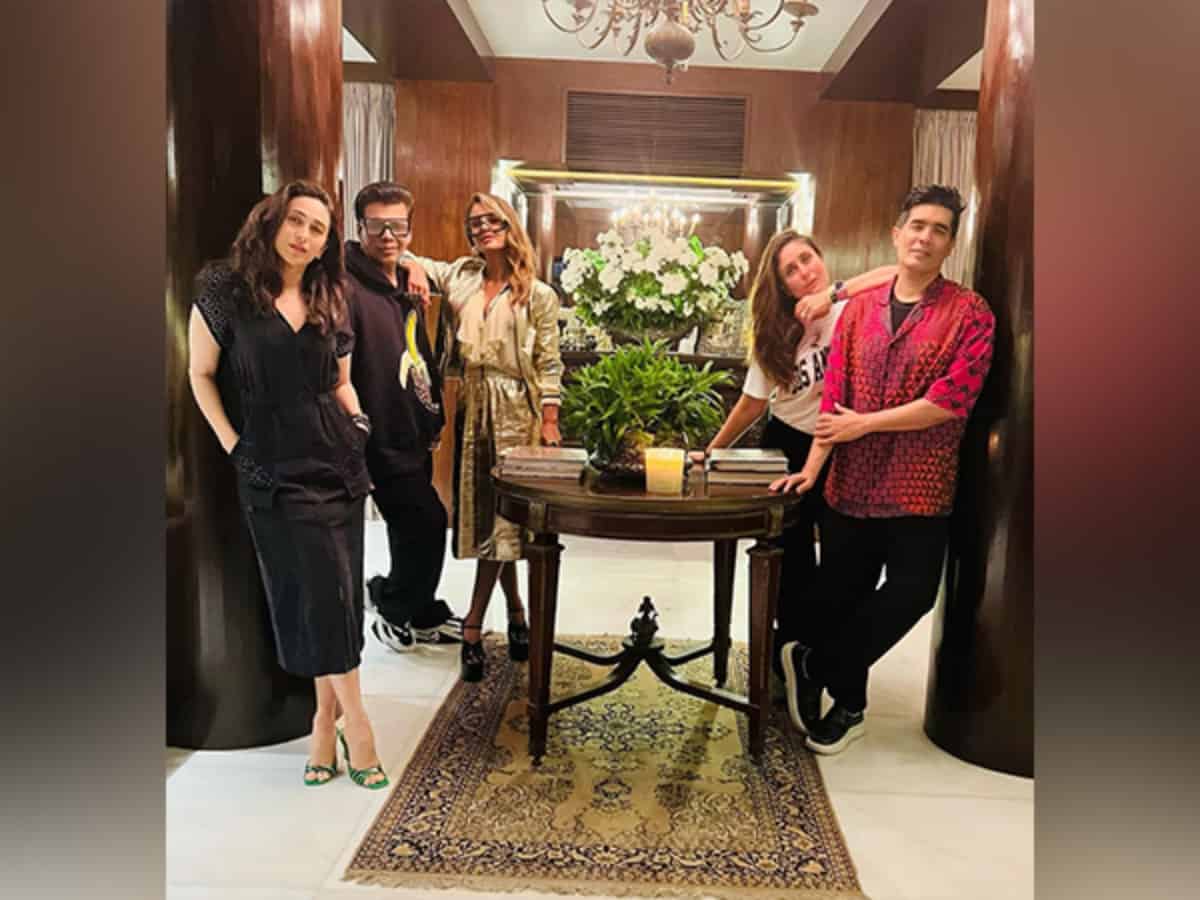 Mumbai: Actor Karisma Kapoor dropped a picture of a fun night with her sister Kareena Kapoor Khan and close friends on Monday, on social media.

Taking to her Instagram handle, the ‘Dil To Pagal Hai’ actor treated her fans to fun pictures.

The Kapoor sisters took some time out from their busy schedule and hangout with their friends at Manish Malhotra’s house. Sharing the post, she wrote, “Just hangin..”

In the picture, Karisma looked gorgeous in a black tied-up dress that she teamed up with green textured heels.

On the other hand, Kareena opted for a comfy yet stylish look. She wore a white graphic tee and black trousers.

The ‘Ae Dil Hai Mushkil’ director was seen dressed in a black tracksuit that he paired with black-white sports shoes.

The fashion designer Manish Malhotra donned a stylish red printed shirt over a black t-shirt and he completed the look with black trousers and sports shoes.

The gang is full of posers as all are seen posing for the camera in style. Karisma also re-shared Natasha’s post and wrote “STRIKE A POSE.”

Karan Johar also took to his Insta stories and shared a picture with a caption.

He wrote, “Trying our best to be candid (failing of course!)”

On the work front, Karisma Karisma has been busy shooting for Abhinay Deo’s ‘Brown’ in Kolkata. The film was announced in April last year. She was last seen in a Zee5 web series ‘Mentalhood’.

On the other hand, Karan is making his directorial comeback with his upcoming movie ‘Rocky Aur Rani Ki Prem Kahani’ after 5. The film stars Alia Bhatt and Ranveer Singh in the lead. Meanwhile, he also announced the second season of ‘The Fabulous Lives of Bollywood Wives’. The show will showcase the daily routine of some famous Bollywood celebrities and their luxurious lives. And his talk show ‘Koffee With Karan 7’ continues to grab the limelight.