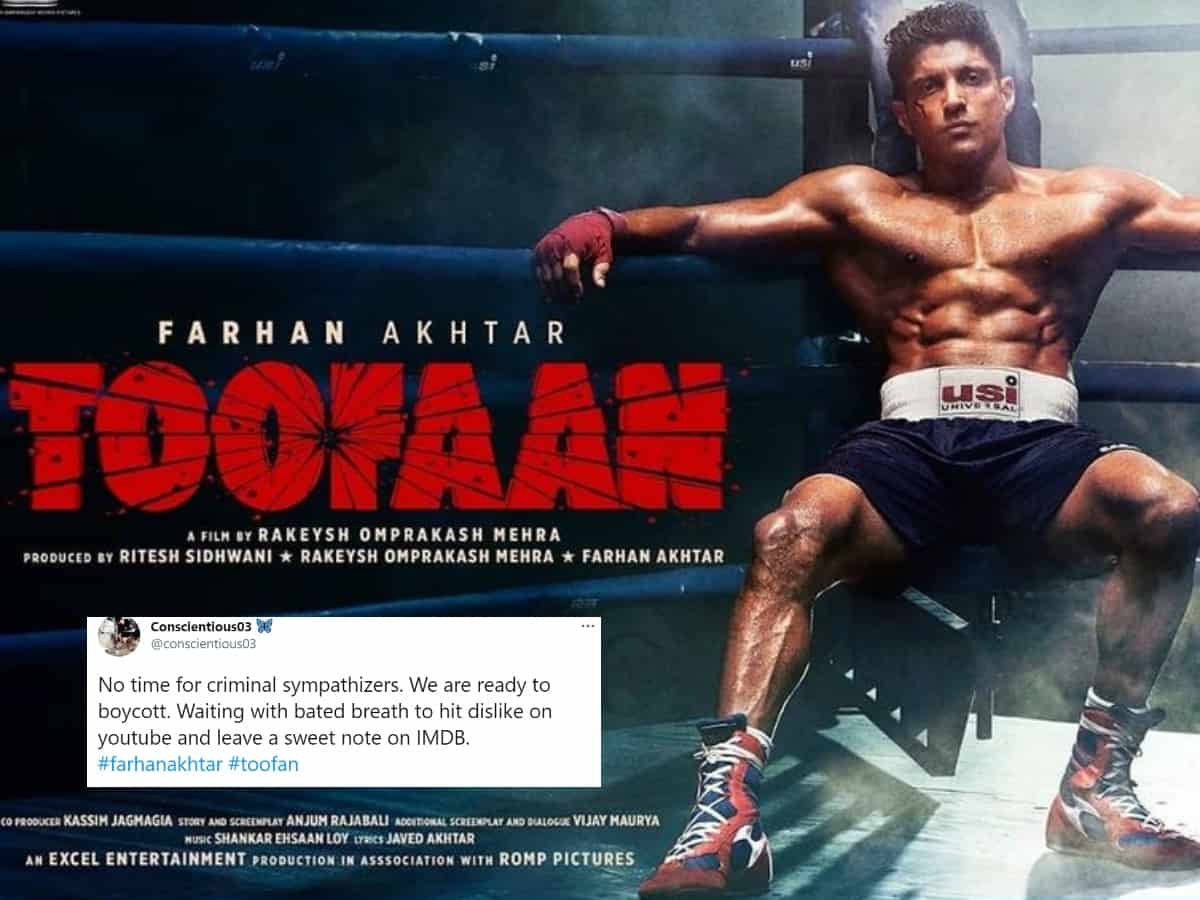 Mumbai: One of the highly anticipated upcoming sports drama of Bollywood, ‘Toofan’, starring Farhan Akhtar, has found itself in trouble after netizens started demanding its ban. Reason behind the boycott of the film is Farhan’s stance on the Citizenship Amendment Act (CAA).

The calls for boycott of Rakeysh Omprakash Mehra’s directorial saw an uproar after the makers announced the release date of the movie. Toofan, starring Mrunal Thakur in the female lead will be streaming on Amazon Prime Video from May 21, 2021.

Farhan Akhtar, Cine And TV Artistes’ Association (CINTAA) general secretary Sushant Singh, Anubhav Sinha,Rakeysh Omprakash Mehra, Swara Bhasker and lyricist Kausar Munir were some of the prominent figures from the entertainment industry, who took part in a protest in Mumbai on 19 December, 2019.

“As a citizen of the country and as somebody who was born and has grown up with a certain idea of India, it is important for me to raise my voice. If everything was ok, why would so many people turn up? Not just in Mumbai, but Delhi, Assam, Bangalore, Hyderabad,” said Farhan Akhtar said while speaking about CAA issue.

Before taking part in the protest, Farhan said in a ‘now deleted’ tweet, “See you on the 19th at August Kranti Maidan, Mumbai. The time to protest on social media alone is over.”

Check out the tweets below:

Twitterati called out for the boycott Toofan as they claimed Farhan Akhtar’s opinions are anti-nationalistic and said that they place country over entertainment. Netizens also said that they will not spare their time, money, and attention to the movie.

On Twitter user wrote, “No time for criminal sympathizers. We are ready to boycott. Waiting with bated breath to hit dislike on youtube and leave a sweet note on IMDB #farhanakhtar #toofan.”

“#FarhanAkhtar Boycott Toofaan India has not forgot @FarOutAkhtar stand nd his statemnt on CAA,” wrote another one.

Check out what other users are saying:

Produced by Excel Entertainment in association with ROMP Pictures and directed by Rakeysh Omprakash Mehra, Toofaan stars Farhan Akhtar as a boxer, alongside Mrunal Thakur, Paresh Rawal, Supriya Pathak Kapur and Hussain Dalal. The film was set to hit the theatres on September 18, 2020. However, due to the novel coronavirus pandemic, the release got delayed and it will now directly release online on May 21.