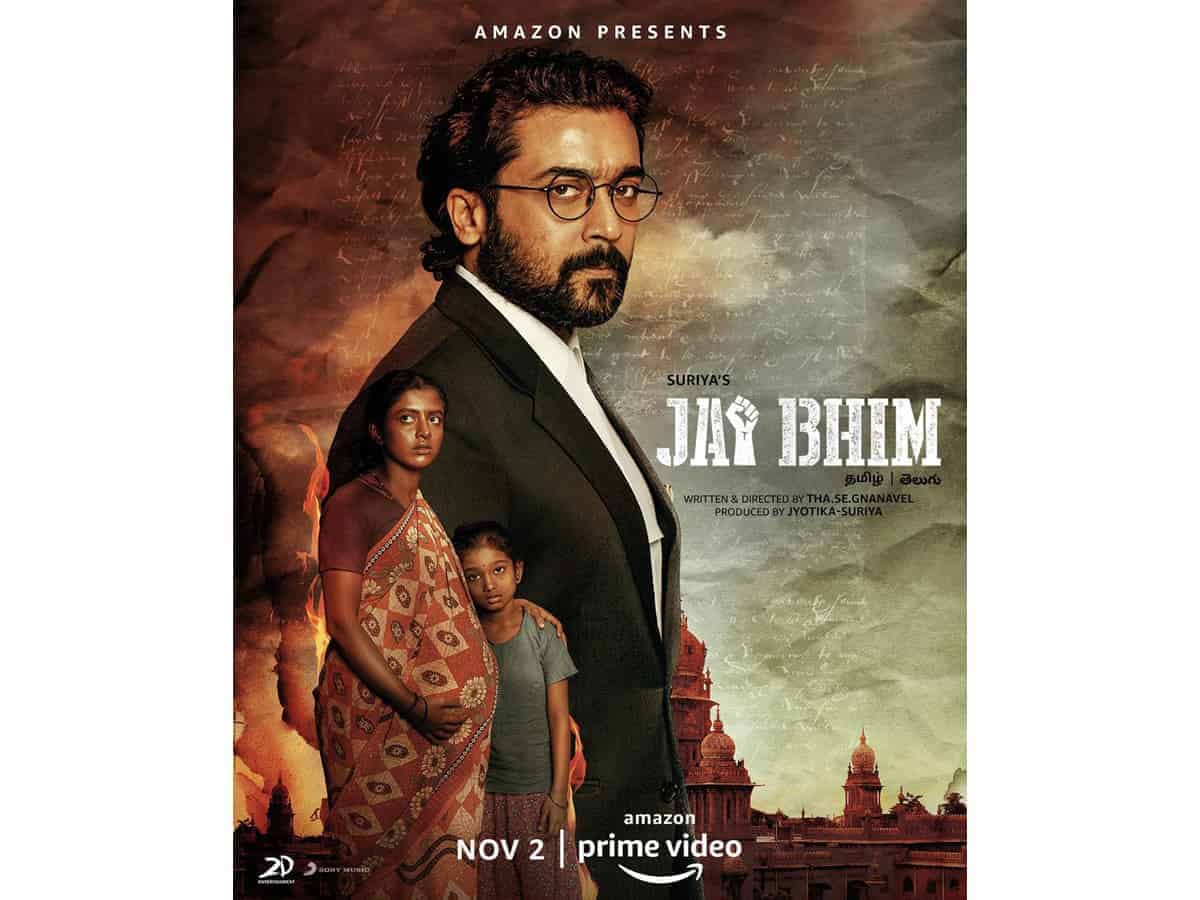 Chennai: Angered at the “wrongful” depiction of the Vanniyar community in the Tamil film ‘Jai Bhim’, starring Suriya, the Vanniyar Sangam president, Pu. Tha. Arulmozhi, has sent a legal notice to the producers, director and Amazon, which operates the OTT platform Prime Video, where the film is being streamed.

The notice, which claims Rs 5 crore in damages and a public apology, was issued to 2D Entertainment, Suriya Sivakumar and his wife Jyothika, because their company A.K. International has co-produced the film, the director-screenwriter T.J. Gnanavel and Amazon.

According to the legal notice, the movie is claimed to have been based on a real-life incident and its storyline draws upon a decision of the Madras High Court.

It retains the names of the people who were involved in the incidents shown in the film, so we have a Rajakannu, Advocate Chandru and the police officer Perumalsamy. The name of the sub-inspector of police involved in the custodial death of an undertrial, however, according to the legal notice, was “deliberately” changed from Anthonysamy to Gurumurthy, and he’srepeatedly referred to as ‘Guru’.

In one of the scenes in the movie, the notice points out, the ‘Agni Kundam’ (fire burning from a holy vessel) symbol of the Vanniyar Sangam is shown in the calendar behind the sub-inspector of police, who commits the atrocity.

The notice says that the makers of ‘Jai Bhim‘ had “deliberately” got a calendar made for the year 1995 with the ‘Agni Kundam’. He said it had been done with the “mala fide intention of defaming members of the Vanniyar Sangam and damaging the image and reputation of the entire Vanniyar community.”

According to the Vanniyar Sangam, changing the name of the villain to Gurumurthy, which resembles that of one of its frontline leaders, and projecting him to be from the community by showing its ‘Agni Kundam’ symbol, implied that the members of the community are prone to committing wrongs and taking illegal actions.

“My client states that by various symbolic representations in your movie, you have wantonly, wilfully and intentionally portrayed the character of the sub-Inspector of police, who is guilty of committing a custodial death in the film and also in the real-life story, belongs to Vanniyar community, whereas the said sub-Inspector does not belong to Vanniyar community,” the notice states.

“It cannot be considered as a casual, innocent, inadvertent mistake and natural sequence in the movie,” the legal notice reads. It adds that the scene was included only “with a view to maligning the image of the Vanniyar community people in the society and with a view to defaming the entire community as a whole.”

Apart from demanding Rs 5 crore in damages, the Vanniyar Sangam has also sought the removal of the “defamatory scenes”, references to the Vanniyar community and its symbol, the ‘Agni Kundam’, from the movie. And it has sought an unconditional apology from the film’s producers and writer for tarnishing the reputation of Vanniyars.

Earlier, PMK leader and Rajya Sabha MP Anbumani Ramadoss had written to Suriya citing the objectionable portions in the movie, alleging that they deliberately targeted the Vanniyars.

Responding to the charge, Suriya had pointed out that the ‘Jai Bhim’ unit had put out a disclaimer right at the start of the movie, saying that this was a story that had only been inspired by a real incident and that the characters, names and events were entirely fictional.