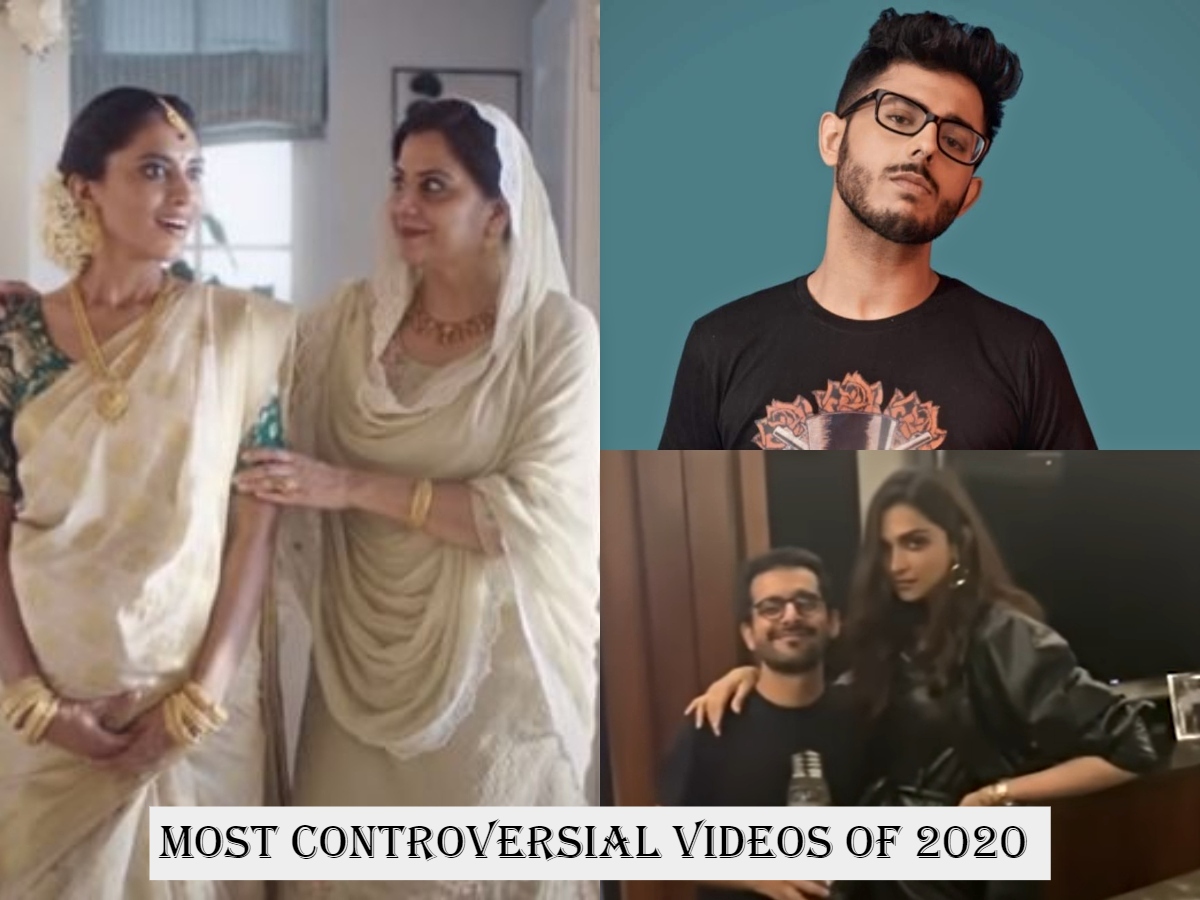 Even in the year that saw world-changing and paradigm-shifting developments, our countrymen have not lost their nature to create outrage about the smallest of things. From a tweet on social media, to advertisements–many things have been blown out of proportion and context.

Several videos and advertisements became a subject of controversy this year. While a few of them reportedly offended groups of population and were criticized, many went to an extent of being pulled down from the internet too.

With the year coming to an end, let us rewind the vidoes that garnered a lot of controversy–ranging from Tanishq’s advertisements, Karan Johar’s party video amid the drugs connundrum to Carry Minati’s roast to TikTok-ers.

In October this year, Titan Group’s jewellery brand Tanishq’s ‘EKTAVAM’ ad was criticised and called for the boycott for promoting interfaith marriage.

Tanishq released an advertisement that showed a Muslim family preparing a traditional Hindu baby shower for their pregnant Hindu daughter-in-law. The description of the video on YouTube read, “She is married into a family that loves her like their own child. Only for her, they go out of their way to celebrate an occasion that they usually don’t. A beautiful confluence of two different religions, traditions, cultures.”

The ad received huge criticism on social media as many felt that it promoted the ‘love jihad.

However, as outrage against the ad grew, Tanishq officially removed the video from all their platforms.

A month later, the jewellery brand found itself in another trouble for another advertisement under its ‘Ekatavam’ campaign.

The ad featured four independent actors Sayani Gupta, Neena Gupta, Alaya F and Nimrat Kaur talking about what they love about Diwali and how they are going to celebrate the festival this year. The ad is about female companionship and oneness. It was about celebrating Diwali with family and not bursting crackers was just one of the messages they gave.

But, the ad did not go well with many as a section of netizens criticised it saying that ‘a ad should not advise Hindus how to celebrate their festivals’

They even had a problem with women not wearing symbols of patriarchy and their badges of being married such as bindis, bangles and sindoor.

The video became controversial after a section of netizens including former Shiromani Akali Dal MLA Manjinder Singh Sirsa alleged that drugs were used in the party.

Popular Indian YouTuber CarryMinati made headlines mid-year after his controversial video titled, ‘YouTube vs TikTok’ was removed by Google’s streaming platform for violating the terms of service.

The video which was taken down was a roast video and it talked about how a famous Tik Toker, Amir Siddiqui who had compared his work with YouTubers such as Ajey Nagar aka Carry Minati. Carry took a direct jibe at TikToker Amir and claimed that TikTok is an inferior platform and in the video, Carry had pointed out various flaws in Amir’s content.

The war of words between the content creators started with TikTok user Amir Siddiqui posting a video calling out YouTubers. In his video, Siddiqui compared both the mediums, and highlighted the unity of the TikTok community. He also accused YouTubers of plagiarising TikTok content. He even tried to instigate creators who roast, to respond to him.

A popular hosiery brand Dollar has landed in controversy for its latest ad featuring Maniesh Paul for “portrays Kashmiris in a bad light”.

In a 30 second ad clip, Maniesh, a tourist, can be seen in one of the Mughal gardens of Kashmir along with his female partner. The ad showcases a man snatching away the actor’s sweater while he’s taking a selfie. Following this, Maniesh can be seen running after the ‘snatcher’ into the wooden ghats on the shores of Dal Lake.

However, the Dollar Ultra ad did not go well with many. It started receiving huge backlash as several netizens took to their social media to express their outrage for portraying Kashmiris in a ‘bad light’. While highlighting how Kashmir has witnessed zero crimes against tourists, the users demanded that the “offensive” advertisement be pulled down.