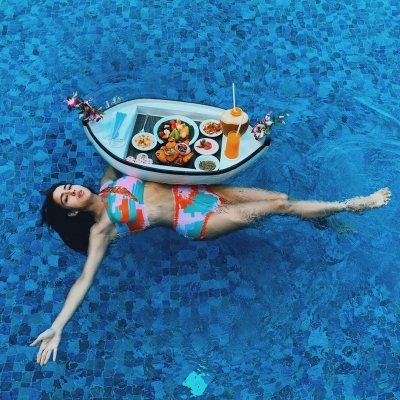 Mumbai, Jan 24 : Actress Sara Ali Khan raised temperature as she shared a new picture of herself enjoying a floating breakfast in a swimsuit.

On Sunday, the actress once again flaunted her poetic side while sharing moments from her vacation in Maldives.

“When sister Sara fears post binge bloat
Brother Iggy says ‘at least fatty will float’
Now that rhyme made sense so I can gloat
And to reward I will consume this entire boat #FloatBeforeBloat,” she shared.

The actress also shared pictures of herself enjoying the breakfast while soaking up the sun. Her two-piece added a pop of colour to the pictures.

Sara was recently seen in the OTT-released film “Coolie No. 1” along with actor Varun Dhawan, and she has started shooting for her next “Atrangi Re”. The film also stars Akshay Kumar, Dhanush and Nimrat Kaur. It is directed by Aanand L. Rai.