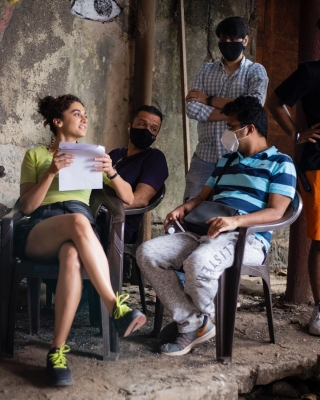 Mumbai, Feb 14 : Actress Taapsee Pannu has wrapped up shooting for ‘Looop Lapeta’ and is very grateful for it. The actress said that she ran behind some films and some have just thankfully fallen in her lap.

Taapsee posted a picture on Instagram, where she is seen holding the script while talking to the director and crew members of the movie.

“I have ran behind some films and some have just thankfully fallen in my lap. This being the latter I couldn’t be more grateful to these guys and the luck line of my palm,” she wrote alongside the picture, she shared on Sunday.

Taapsee added: “From entering the narration with the idea to say No, to leaving it with an immediate Yes, thanks to these gentlemen for hanging by a solid script and concept for years and being more sure of me being Savi than I was. P.S – I guess in the end an actor has to ‘run’ behind/for a good script

Meanwhile, Taapsee has also started training for her next film Shabaash Mithu, where she will essay the role of Indian women’s cricket team skipper Mithali Raj.