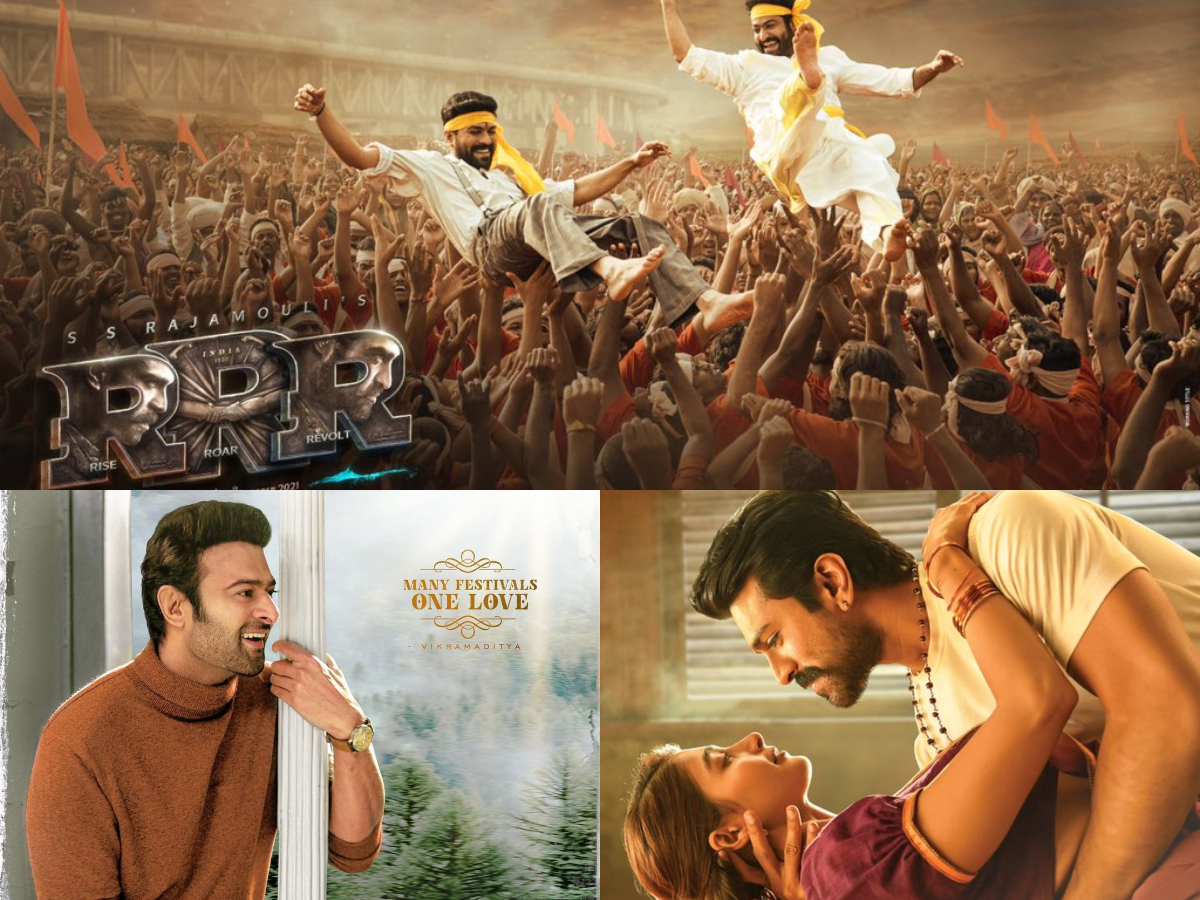 Hyderabad: The makers of the two much-awaited upcoming movies of Tollywood–‘RRR’, ‘Acharya’ and ‘Radhe Shyam’ on Tuesday marked the occasion of Telugu New Year ‘Ugadi’ by sharing new posters of the film.

‘Baahubali’ filmmaker SS Rajamouli who is directing ‘RRR’ took to Instagram and unveiled the new poster of the forthcoming film.The team released a striking visual of celebration and happiness on the festive day of Ugadi, much to the happiness of fans.

The picture sees both Ram Charan and Jr NTR amidst a sea of people, who are carrying them in their hands. This visual is a representation of their friendship that will reflect in the film.

Along with the joy-filled poster, Rajamouli extended greetings and wrote, “Here’s wishing you all a prosperous year ahead.”

‘RRR’ will reportedly be a fictional story set in the 1920s pre-independent era and will be based on the lives of two celebrated freedom fighters- Alluri Sitarama Raju and Komaram Bheem. It is being bankrolled by DVV Danayya under the banner of DVV Entertainment.

The much-talked-about film ‘RRR,’ will release in multiple languages on October 13 this year

On the auspicious occasion of Ugadi, the makers of Prabhas starrer Radhe Shyam have unveiled a new movie poster featuring the Telugu star. Prabhas is seen smiling as he leans on to a pillar for support. He wears a brown coloured high-neck T-shirt and checkered pants, giving off retro vibes.

Prabhas too took to his social media and shared the new poster and wrote, “One binding factor of the celebrations of these beautiful festivals is LOVE. Feel it. Cherish it. Spread it. Wishing you and your loved ones a very Happy Ugadi, Gudi Padwa, Baisakhi, Vishu, Puthandu, Jur Sital, Cheti Chand, Bohag Bihu, Navreh & Poila Boshak.”

Radhe Shyam which stars Pooja Hegde in the female lead is set to hit the screens on July 30. Radha Krishna Kumar is directing Radhe Shyam, which has been shot in many picturesque locations abroad.

Pooja Hegde took to her Twitter, and left fans excited as she revealed her first look from the film Acharya. She tweeted, “Here’s the love of #Siddha – #Neelambari Wishing you all a very #HappyUgadi. #Acharya.”

Ugadi is the New Year’s Day in the states of Andhra Pradesh, Telangana and Karnataka. The festival is celebrated on the first day of the Hindu lunisolar calendar month of Chaitra, which typically falls in April. On this day, Marathi and Konkani Hindus also celebrate Gudi Padwa that marks the beginning of the new year.