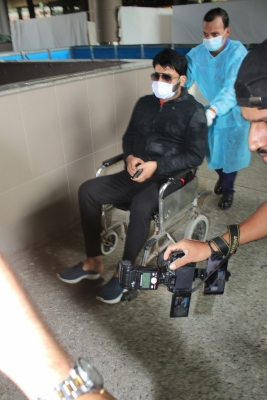 Mumbai, Feb 22 : Comedian Kapil Sharma is in the eye of the storm for his mercurial temper once again. On Monday, while exiting Mumbai airport seated in a wheelchair, he had a spat with media photographers and video persons who rushed towards him to capture his pictures.

The comedian was later also heard hurling abuse at the photo journalists.

In the video, Kapil’s bodyguard is seen taking the lead and asking the photographers to step back, to which one of the lenspersons replied: “We are clicking pictures from a distance.”

This left the photographers baffled, and someone from Kapil’s team is seen trying to pacify the angry paparazzi, asking them to delete the video.

One of the paparazzi replied: “He has abused us. We will not delete the video.”

Eyewitnesses claimed that Kapil’s bodyguard pushed the media persons first and then he shouted at them.

Kapil Sharma has had previous instances where he lost his cool, getting into arguments. His infamous fight with co-star Sunil Grover on a flight was spoken about extensively, when Kapil reportedly threw a shoe at Sunil.