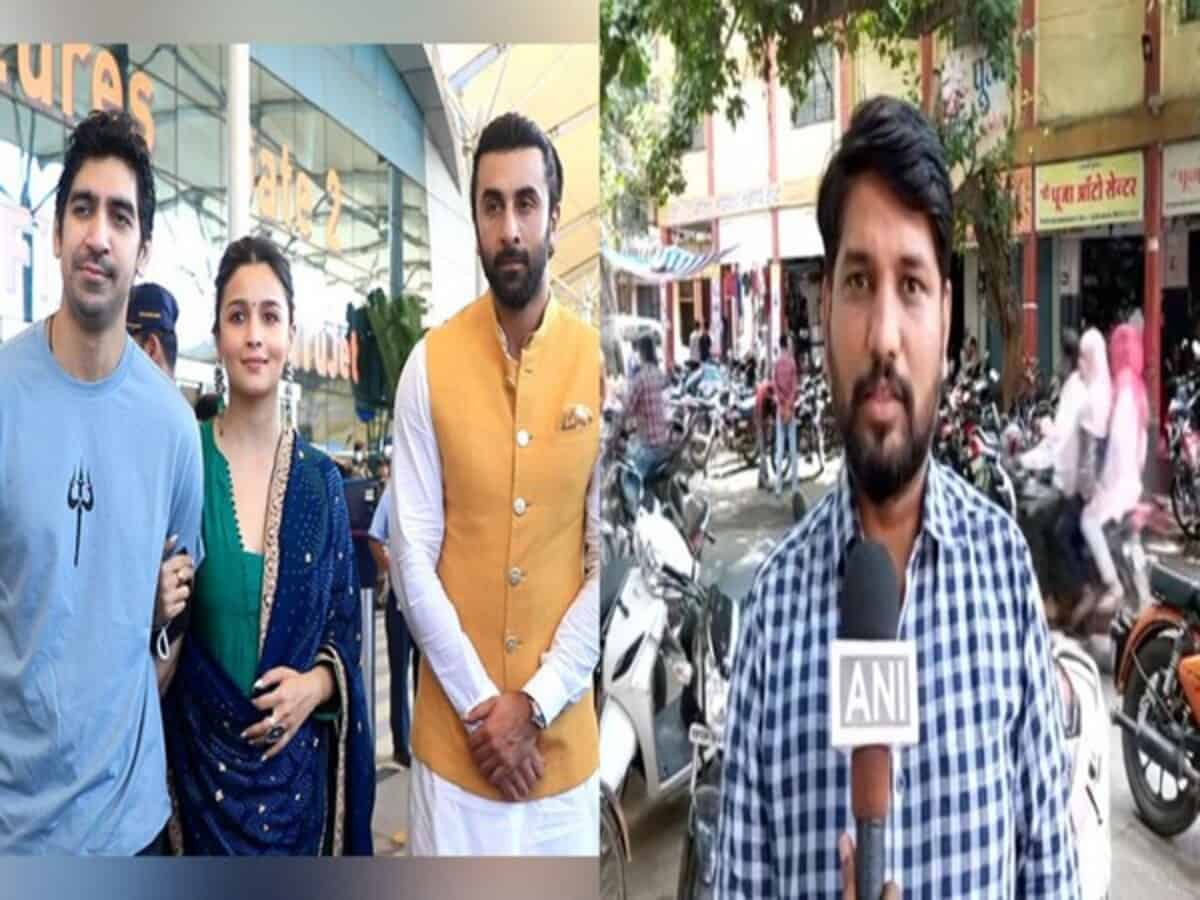 Ujjain: Members of the Bajrang Dal, recently protested against Bollywood actors Ranbir Kapoor and Alia Bhatt during their visit to Ujjain’s Mahakaleshwar Temple after the ‘Rockstar’ actor’s controversial ‘beef’ statement.

Bajrang Dal members stated that Ranbir and Alia will not be permitted to enter the premises of the temple, as Ranbir has hurt their religious sentiments.

Some social media users went through the old archives and dug up Ranbir’s old interviews in which the ‘Besharam’ actor once said that he likes to eat beef and circulated the clip on social media.

Due to his 11 years old comment, the actor is currently facing a lot of backlash on social media and trollers are using the hashtag #BoycottBrahmastra on Twitter, asking the people not to watch the film.

Talking to ANI, Bajrang Dal member Ankit Choubey said, ” Ranbir Kapoor is considered an idol among the Hindu youngsters of our country, and all his films get a great response from the netizens. But his statement about eating ‘beef’ in front of a Pakistani anchor was not acceptable, and we opposed it. If anyone talks like this about our religion and culture, he will be opposed. We got to know that Ranbir is arriving at Baba Mahakaal temple to get the blessings, and we opposed it. In future also, if any Bollywood celebrity comments like this on our religion and culture, Bajrang Dal will oppose it again.”

‘Shamshera’ didn’t work because content was not good: Ranbir Kapoor

Bajrang Dal members held black flags and placards at the Mahakaleshwar Temple, as a sign of protest against the film.

Local police took the situation under control and some protesters were beaten up by the officials for breaching security.

Talking about the protest, Collector and President of Mahakaleshwar Temple Trust, Ashish Singh told ANI, “Earlier the group told us that they are not going to protest at the temple, still, full security was put in place from our side. Some members of the team visited the temple and sought the blessings of the deity but some members couldn’t. We will take care of this type of situation in the future. “

Ranbir and Alia were not allowed to enter the Temple premises and only Ayan Mukerji got permission to take the deity’s blessing.

‘Brahmaastra Part-1: Shiva’ director Ayan Mukerji, during a recent media interaction stated, “I felt bad that Ranbir and Alia couldn’t come with me.”

Made on a massive budget of around Rs 450 crores, ‘Brahmastra’ took almost 5 years to hit the theatres. The film is all set to release on September 9 and has been a dream project for Karan Johar’s Dharma Productions, director Ayan Mukerji, Ranbir, and Alia.

Helmed by Ayan Mukerji, ‘Brahmastra’ also stars Amitabh Bachchan, Mouni Roy and south actor Nagarjuna in the lead roles, which is all set to hit the theatres on September 9, 2022, in Hindi, Tamil, Telugu, Malayalam, and Kannada.