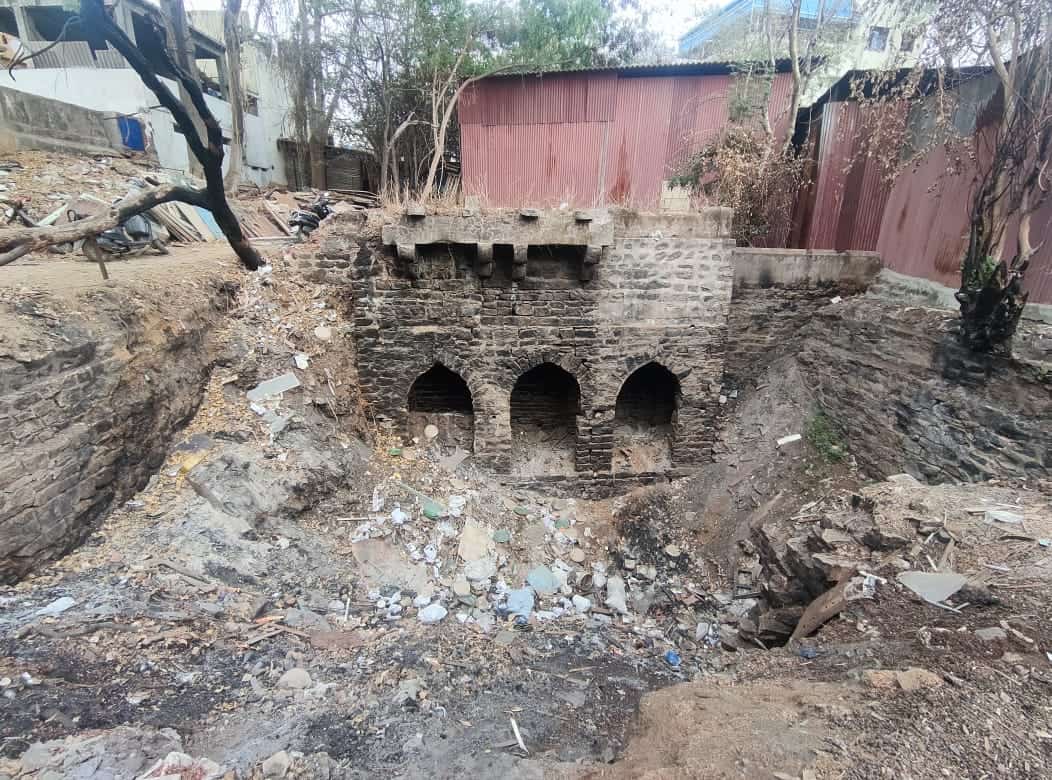 Hyderabad: In yet another case of state apathy, the baoli (stepwell) inside the age-old Saidanima’s tomb on the Hussain Sagar or Tank Bund road has been lying due to neglect and lack of maintenance from years. The Maqbara or grave of the lady Sufi saint has a huge enclosure area, most of which has also been reportedly encroached upon by locals who run businesses inside.

A visit to the Saidanima’s tomb by this reporter showed that the Baoli has not just been unused from years, but that it is in dire need of repairs. The staircase of the stepwell itself has been damaged to such an extent that one cannot even go down inside to look at the edifice. On the face of it, it seems as if the shops inside the tomb complex (selling wood) have been burning waste and wooden materials inside the baoli itself.

Except for the main tomb area, the rest of the complex has clearly fallen prey to encroachments, as is the case of many historical Waqf properties in Hyderabad and Telangana. Syed Meraj Ahmed, a descendant of Saida-bi-Ma Sahiba, known famously as Saidanima, said that the Dargah complex has been in a very bad state from over a decade. “The baoli used was earlier being used for the upkeep of the place, but it is in a bad state,” he told siasat.com.

Meraj Ahmed further alleged that the current Mutawalli or caretaker of the place got himself instated in the position by forging documents and presenting those to the Waqf Board. Currently, he is fighting a legal battle against the caretaker of the tomb in the Waqf Tribunal. “The place is officially titled ‘Maqbara Hazrat Abdul Haq’, and is the registered with that name in the Waqf Board’s registry. It is about 10,289 square yards in size,” he informed.

However, in some respite, Arvind Kumar, principal secretary (municipal administration and urban development), tweeted last month that he would look into the restoration of the baoli. Kumar was responding to Mehraj’s tweet after the latter posted about the baoli’s pathetic condition.

In this capacity, he traveled to England as well. Jang eventually built a tomb in memory of his mother, Saidanima, which is is located north side of the Hussain Sagar’s reservoir bund road, heading towards Secunderabad. It is somewhat in isolation from most historical monuments, and is a landmark monument which often goes unnoticed, unless one stops for a few seconds and notices his/her surroundings.

The structure’s onion-shaped dome placed over an octagonal base marks the tomb, points out Sibgatullah Khan, an architecture student from the city who runs Deccan Archive. He pointed out that panels of geometric cut plaster stand between the lobed arches, which rest on double baluster columns. The upper chamber of the monument has arches which are clearly drawn from the Qutb Shahi era, whereas the ground floor arches appear to be of Mughal inspiration.

The erstwhile state of Hyderabad, run by the Nizams of the Asaf Jahi dynasty, lasted from 1724 to 1948. It had seven rulers with the last one being Mir Osman Ali Khan, the seventh in line, who had his princely state annexed to India in 1948, more than a year after independence.