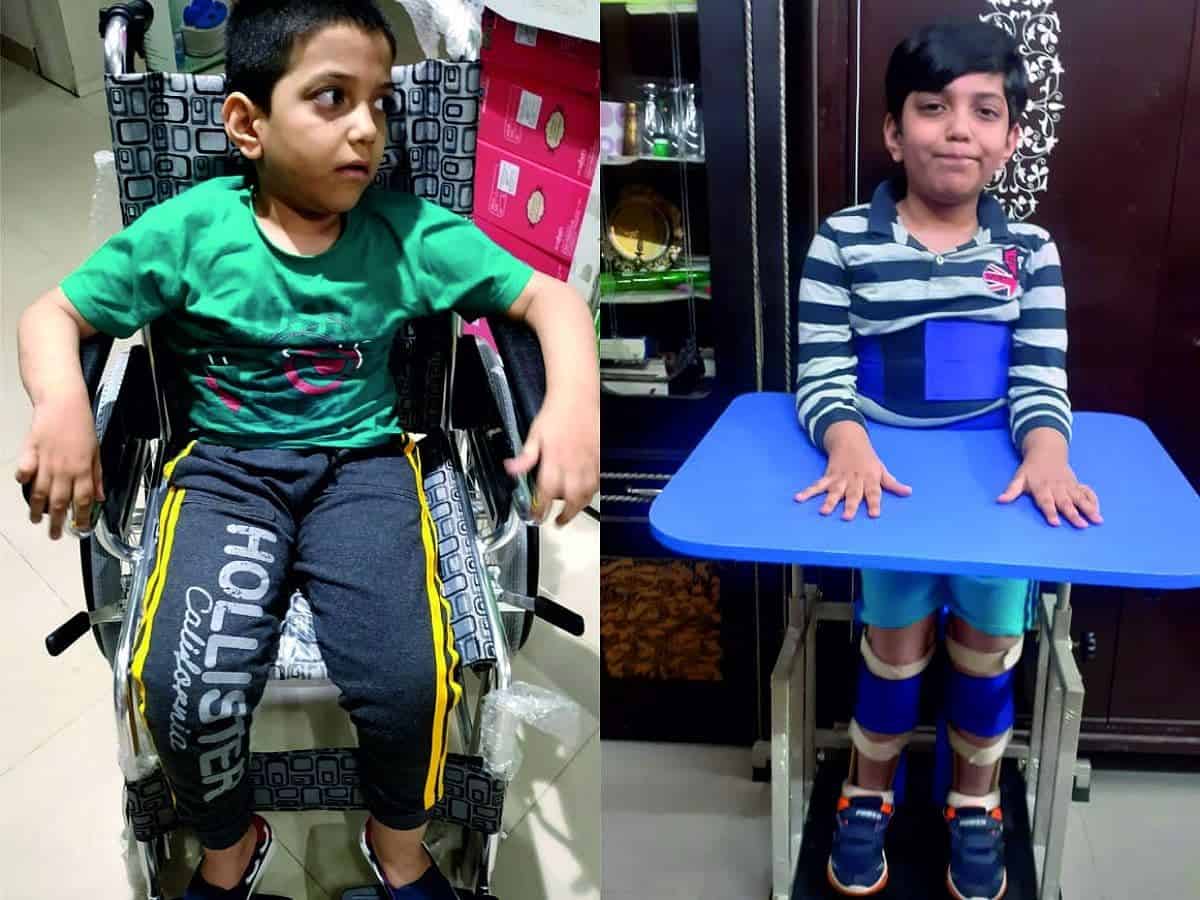 Hyderabad: A United Arab Emirates (UAE) based Hyderabadi parent is seeking help from the public for treatment worth Rs. 5 crore for their 8-year-old son who is battling a devastating disorder called Spinal Muscular Atrophy (SMA). The condition has left the child unable to walk.

Syed Arhaam Ali, who suffers from type-2 spinal muscular atrophy, cannot play and do everything that children of his age does It is a genetic neuromuscular disorder that affects the nerve cells that control voluntary muscles (motor neurons). Without treatment, children with SMA2 develop progressive muscle weakness between the ages of 6 and 12 months.

“There was no medication for this condition at that time. Then doctor advised us to start with physiotherapy, but it is a progressive disease and physiotherapy alone will not help,” Ali said. Asghar Ali and his wife Syeda Amreen Fathima trying their best to take care of Arhaam as SMA kids have many problems as they cannot stand and walk. They also have breathing problems scoliosis.

Despite the health problems he faces each day, Arhaam has completed his primary education and he is very intelligent in studies, “There are many ups and downs but we never lost hope. It was a tough decision for us to take admission in school as the classroom was at first floor and we needed to carry him to the class. The management was not cooperative and did not shift the class to ground floor,” Asghar Ali adds.

Speaking to siasat.com, Syed Arshad Ali uncle of Arhaam said, “There was a time when my nephew started to crawl when he was around 1 year, we love to see him trying to walk. But it was so disheartening for all of us that  he got diagnosed with SMA Type 2 “

He appealed to Telangana chief minister K Chandrasekhar Rao to take personal interest in all the SMA patients and help them financially. “Where can people like us can take a part in raising funds? Why doesn’t the  government of Telangana help us with some financial support? The drugs which are given to SMA patients should be free from all the taxes,” Arshad Ali added.

The child’s mother Syeda Amreen Fathima also said that the FDA has approved a medicine called EVRYSDI for SMA kids which is launched by ROCHE. “This medicine is also available in India but it is very expensive and we need to take this for life time. So we decided to crowd fund for medicine,” she told siasat.com.

Amreen further adds that each bottle of EVRYSDI is 200 Ml can used for 12 days and cost Rs 6.2 lakhs. So for a year it cost 74 lakhs Rupees. In today’s world, there are many platforms where there are people who come forward and help each other raise money. Syed Arhaam Ali is also on the ‘Impact Guru’ program, which his family started a month ago.

IFSC code : YESB0CMSNOC (The digit after B is Zero and the letter after N is O for Orange)

Please support and spread the word.

Another distressed UAE based Indian parent Rahul Pathak, 37 and wife Astha Muthoo, 35, of a 6-year-old girl who is battling a devastating disorder—SMA and need Rs 16 crore drug to save her life.

Arya Pathak, who was diagnosed with spinal SMA at the age of 1.

Illness has deprived Arya of her childhood that many take for granted, and forced her to spend weeks in intensive care. Even a cold could take a heavy toll on her weak body.

The most effective medicine, Zolgensma, is also the most expensive drug in the world, costing Rs 16 crores for a one-time infusion.

Raising money without an agreement with a registered government charity is against the law in the UAE.

But donors can pay money directly to hospitals to help with medical bills – which many people do generously.